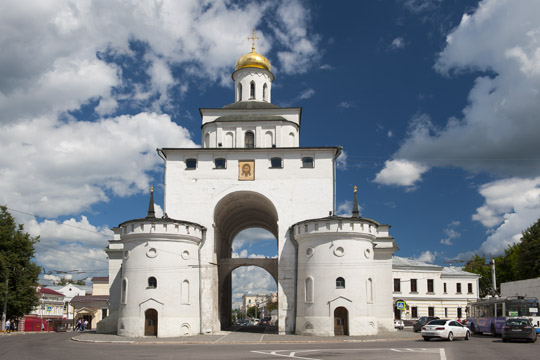 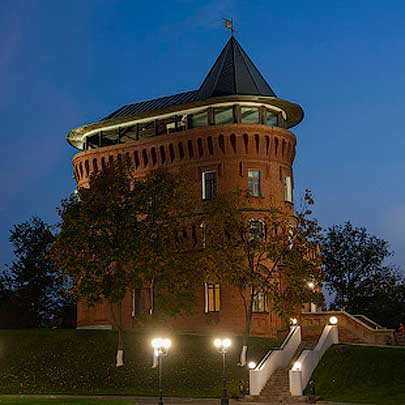 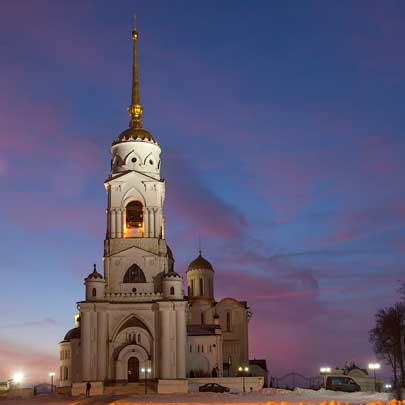 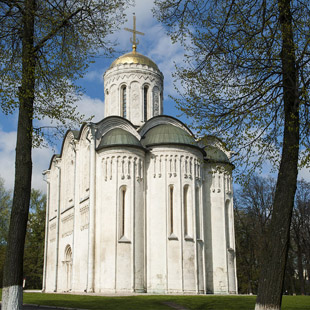 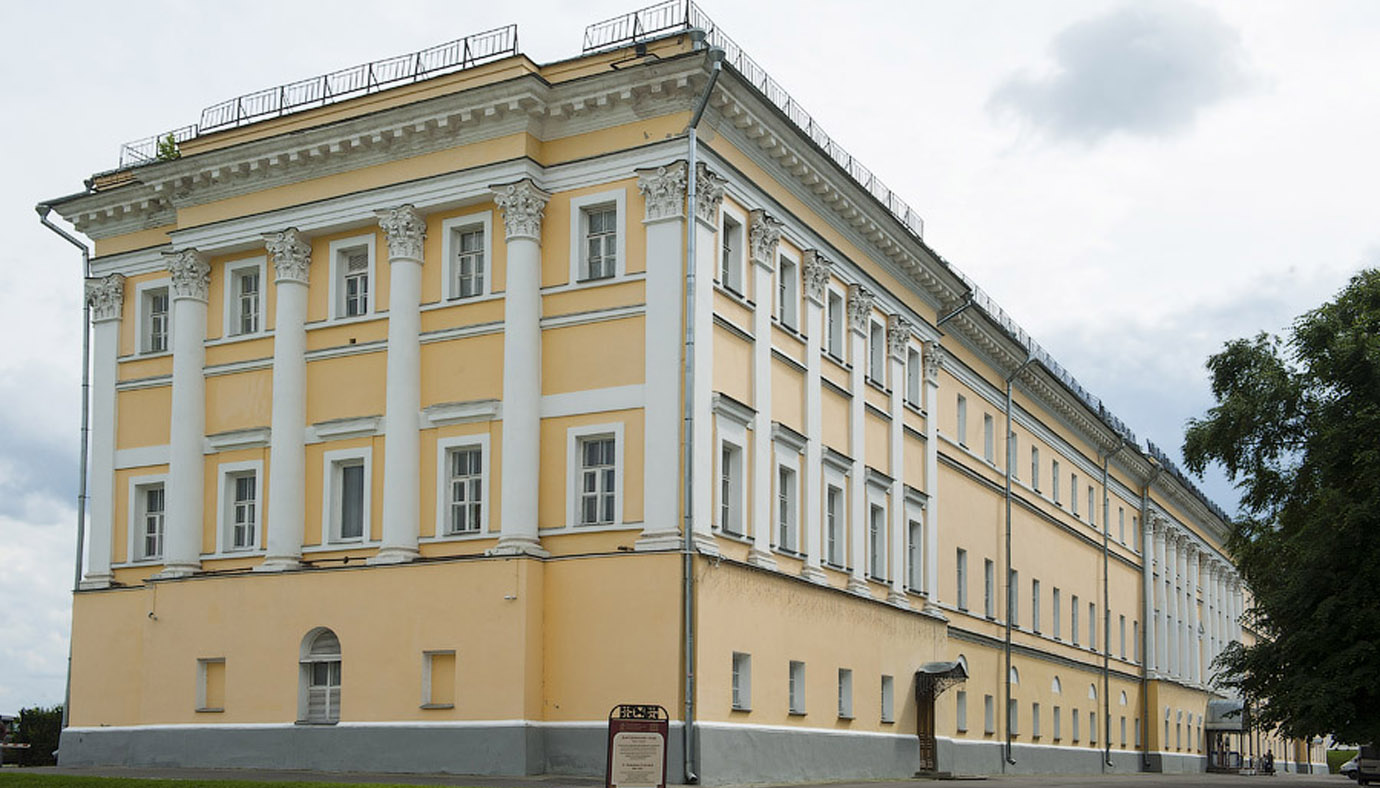 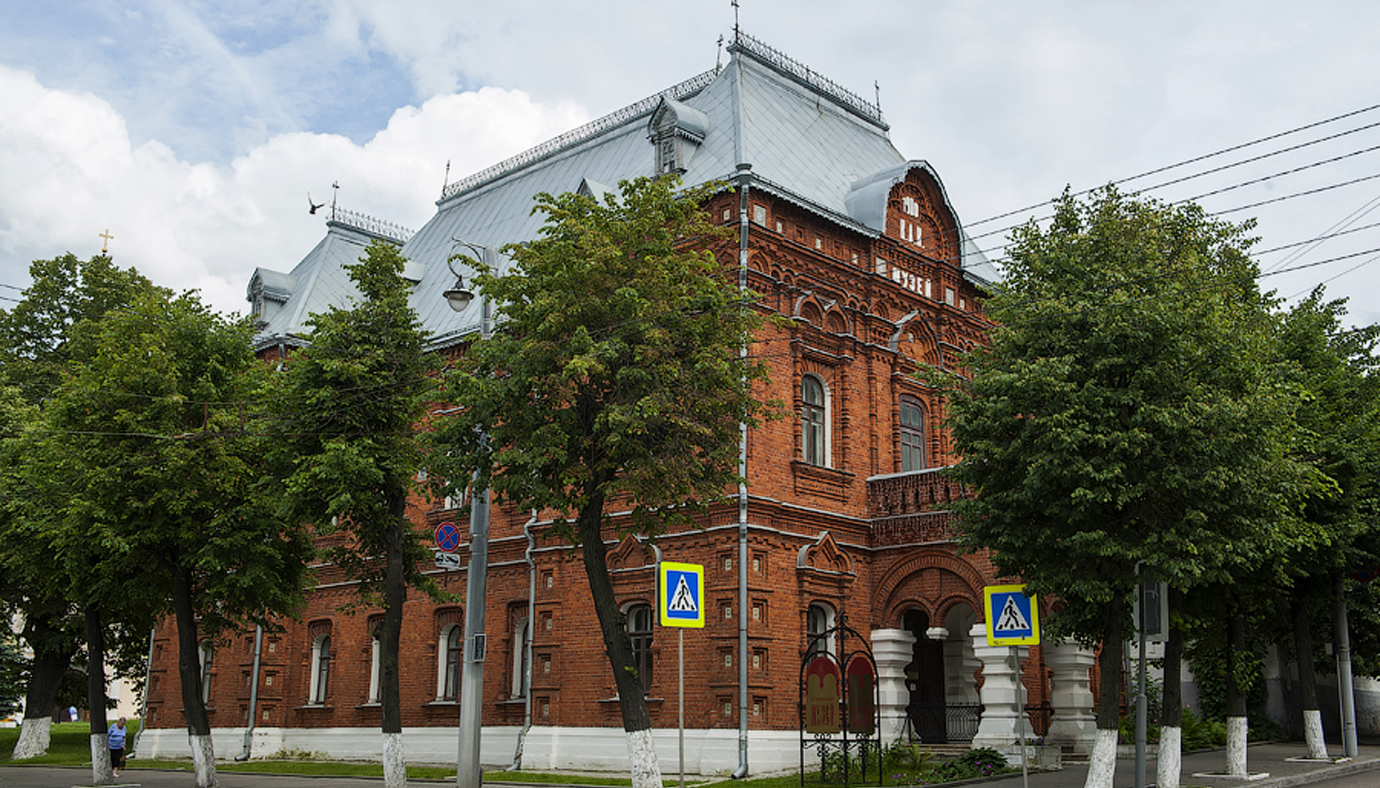 The Golden Gate was the main entrance and defensive tower of the fortress created by Prince Andrei Bogolyubsky of Vladimir. It was built out of limestone between 1158 and 1164. The original fortress had 5 outer gates but only the Golden Gate has survived.

The Golden Gate is a mighty tower pierced with a 14-meter-high archway and a crosspiece in the middle. Enormous oaken gates plated with gilded copper closed the passage in Bogolyubsky’s time. A small church, the Church of the Deposition of the Robe of the Holy Virgin, was erected on the top of the building, and the staircase up to the church was hidden inside the southern wall of the tower. The area around the church served as the upper defensive platform. The battle tower, the triumphant arch, and the church together created the laconic but impressive architecture of the Golden Gate – the main gate of Vladimir, which became the new capital of Northeastern Russia under Prince Andrei Bogolyubsky.

The earthen ramparts of the city’s fortress supported the Gate on both sides. In February 1238 the Golden Gate survived the assault of the Mongol army. This was the first of many sieges of Vladimir during the longstanding Mongol invasion. The Golden Gate withstood bombardment by the Polish in the early 17th-century. Despite the numerous fires and wars, dilapidation, and several repairs, the original appearance of the Golden Gate had been preserved almost without alteration until the late 18th century, when the building’s shape was seriously changed. The ramparts adjoining the Gate were removed; buttresses surrounded by circular bastions were added to the four corners of the old tower to reinforce it; the gateway church was disassembled, built in brick, and reconstructed in 1810; and the platform around the church was turned into a roofed gallery.

Today the Golden Gate belongs to the Vladimir and Suzdal Museum, and in 1992 it was added to the list of UNESCO World Heritage Sites. On top of the Gate, inside the former church, you can find a small museum dedicated to the military history of Vladimir. The museum’s most impressive feature is a 3D display that recreates the siege of Vladimir by the Mongols in 1238. The documents, medieval Russian weapons and armor, banners, and portraits of Russian commanders exhibited here are a great way to learn about Russian history. Special attention is given to the Heroes of the Soviet Union born in the Vladimir Region – many of whom helped defeat Nazi Germany. 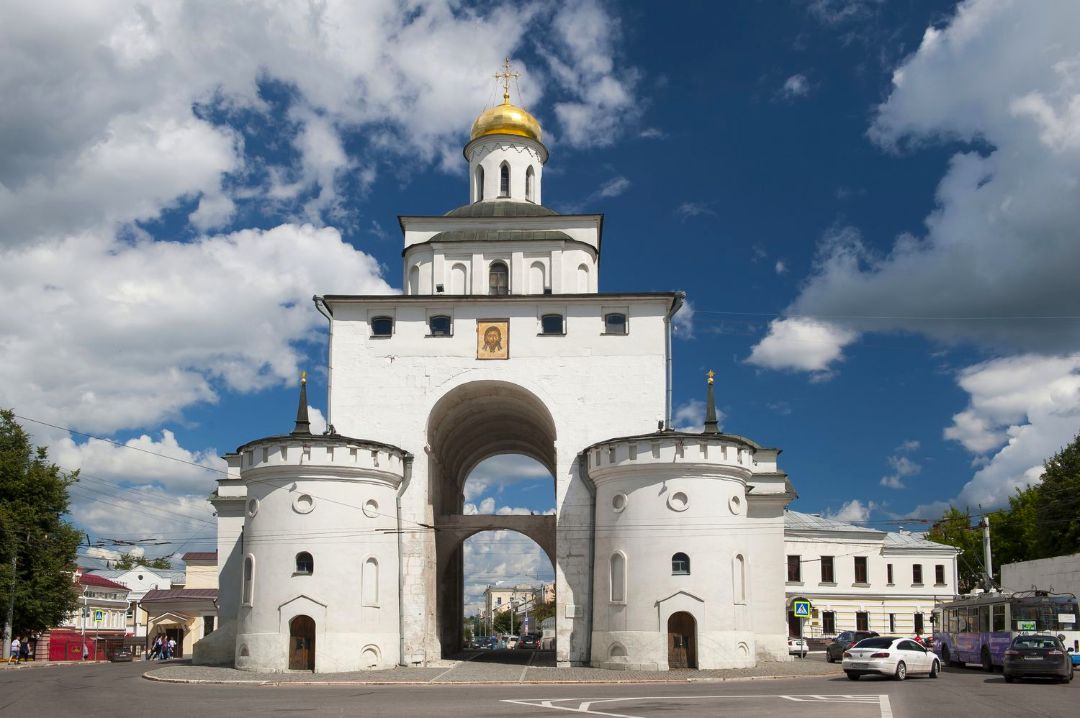 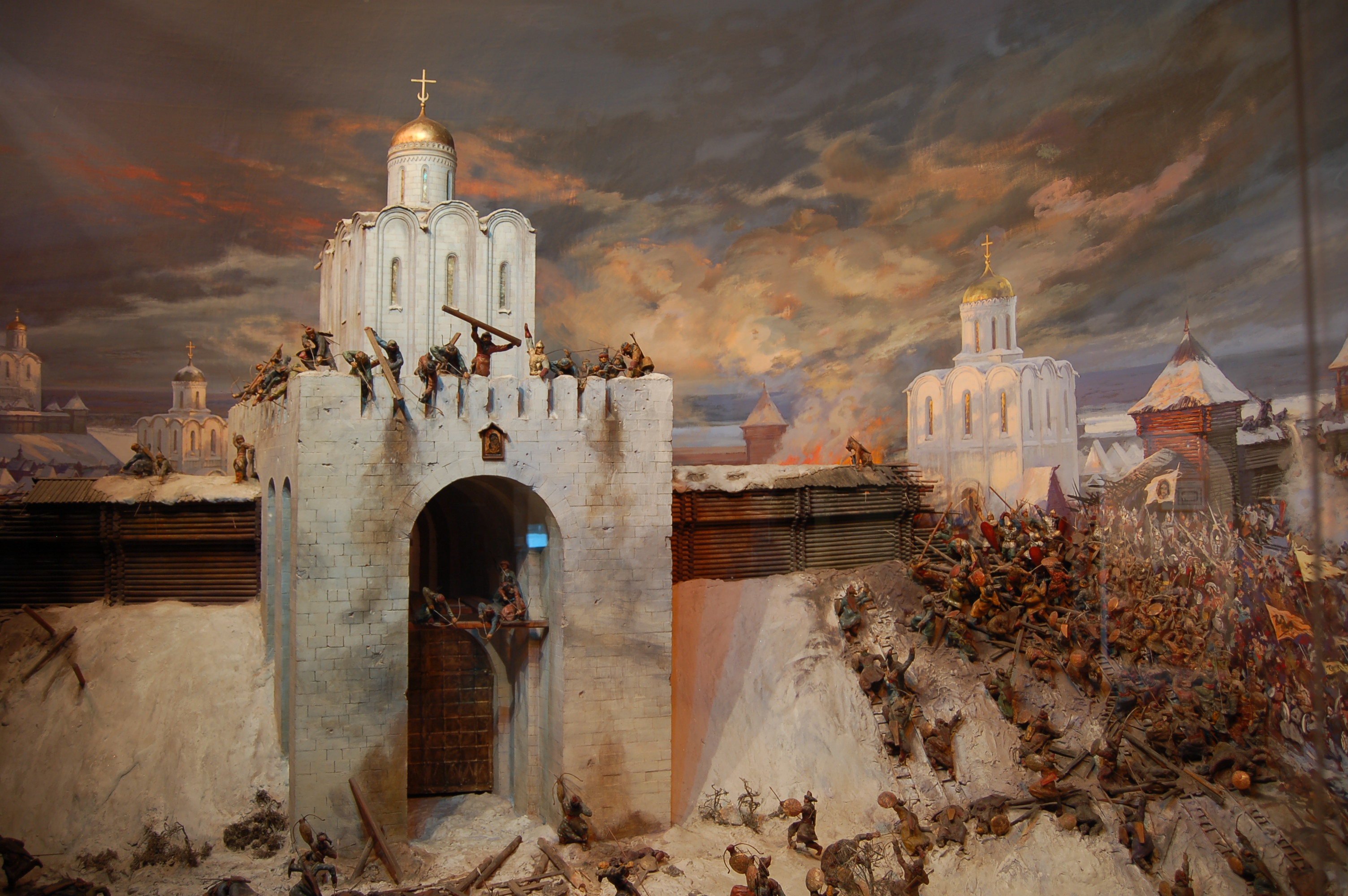 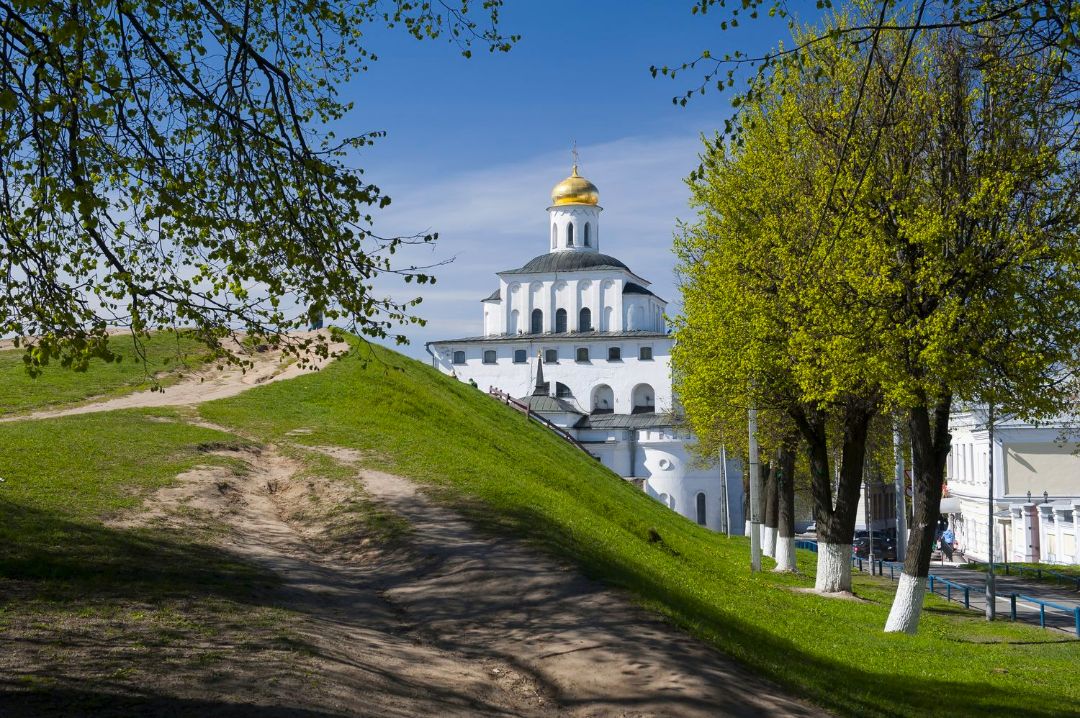 It is a monument of industrial architecture of the early 20th century. The necessity to build a water tower appeared in the 1860s when the Vladimir running water system was constructed. According to the first project the water tower was to be placed inside the former church above the Golden Gate. This project was fortunately not realized. Later a wooden water tower was built on the Kozlov Val (medieval rampart). In 1912 the building was completely reconstructed according to the project of architect Sergei Zharov. The building is a three-tiered structure made of red brick in the Pseudo-Russian style. Windows serve as a decoration, among them there are double ones, of different height and shape in each tier.

Up to the mid-20th century it worked as a water tower. The building was restored in 1970. The Old Vladimir Museum Exhibition was located in the three floors of this beautiful building. It deals with the 19th-century Vladimir. The exhibits – authentic photographs, clothes, newspaper articles, private belongings of the citizens – reflect the everyday life of provincial Vladimir. The top floor is a nice open-air observation deck to enjoy the surrounding area. 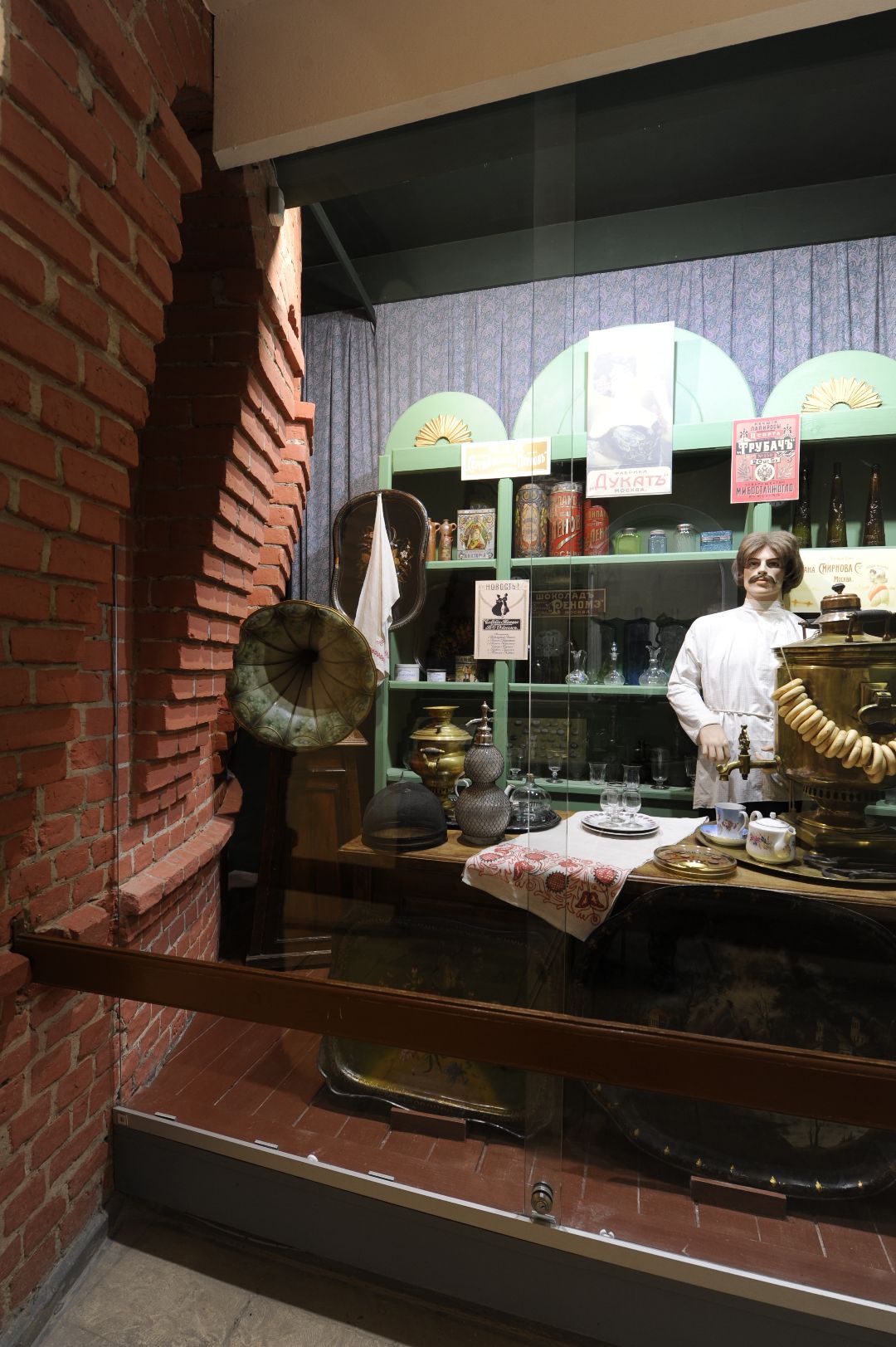 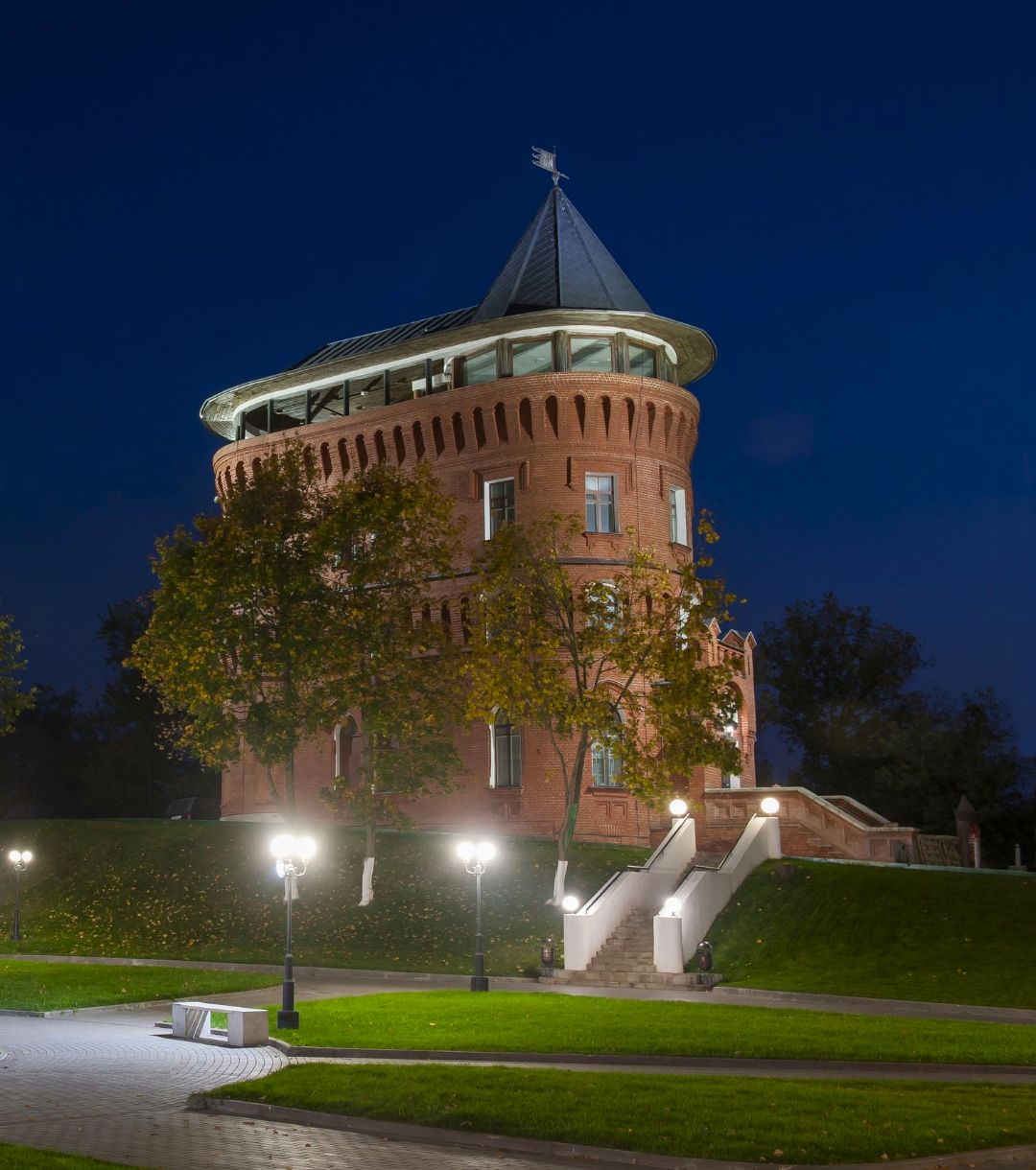 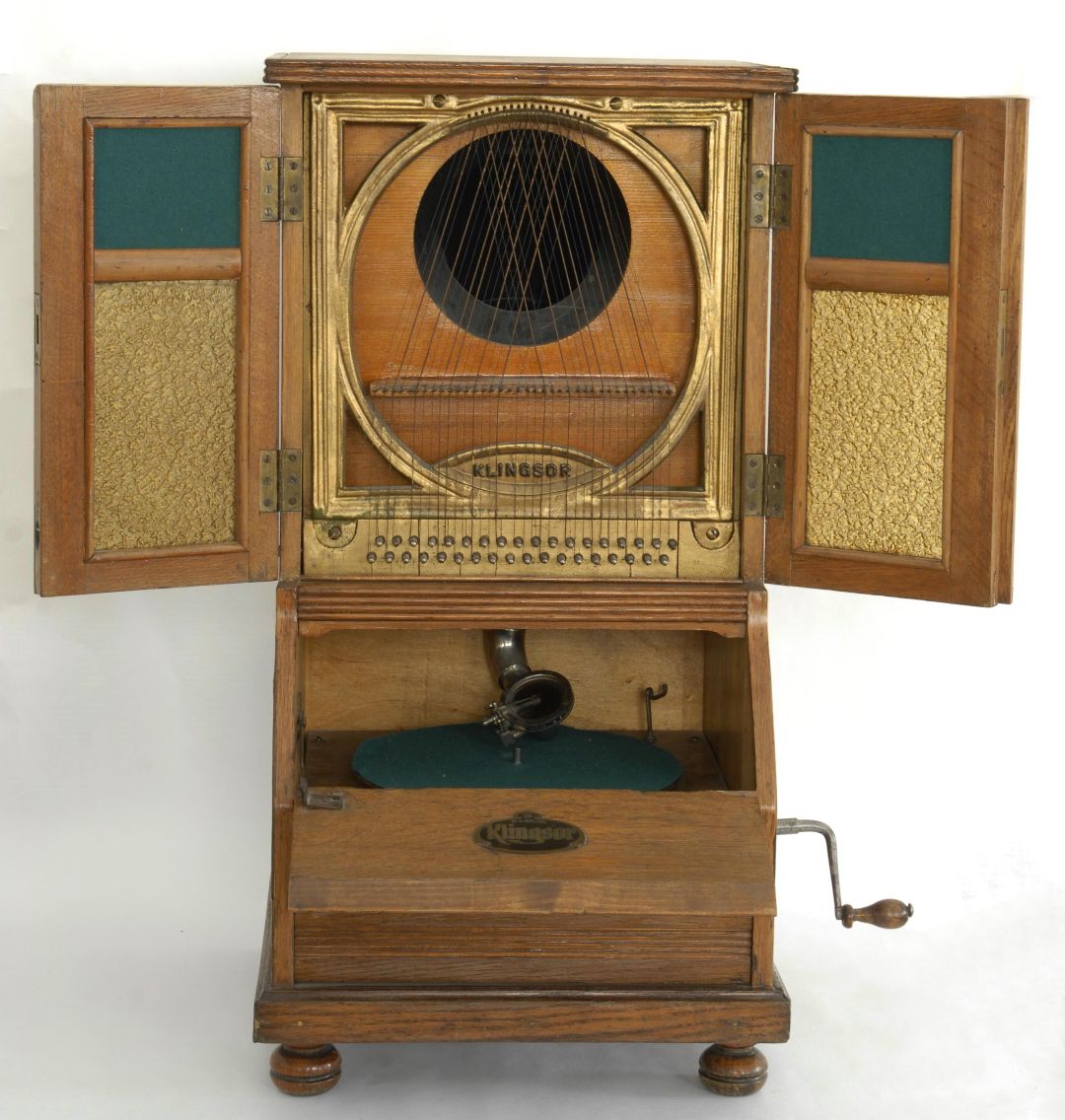 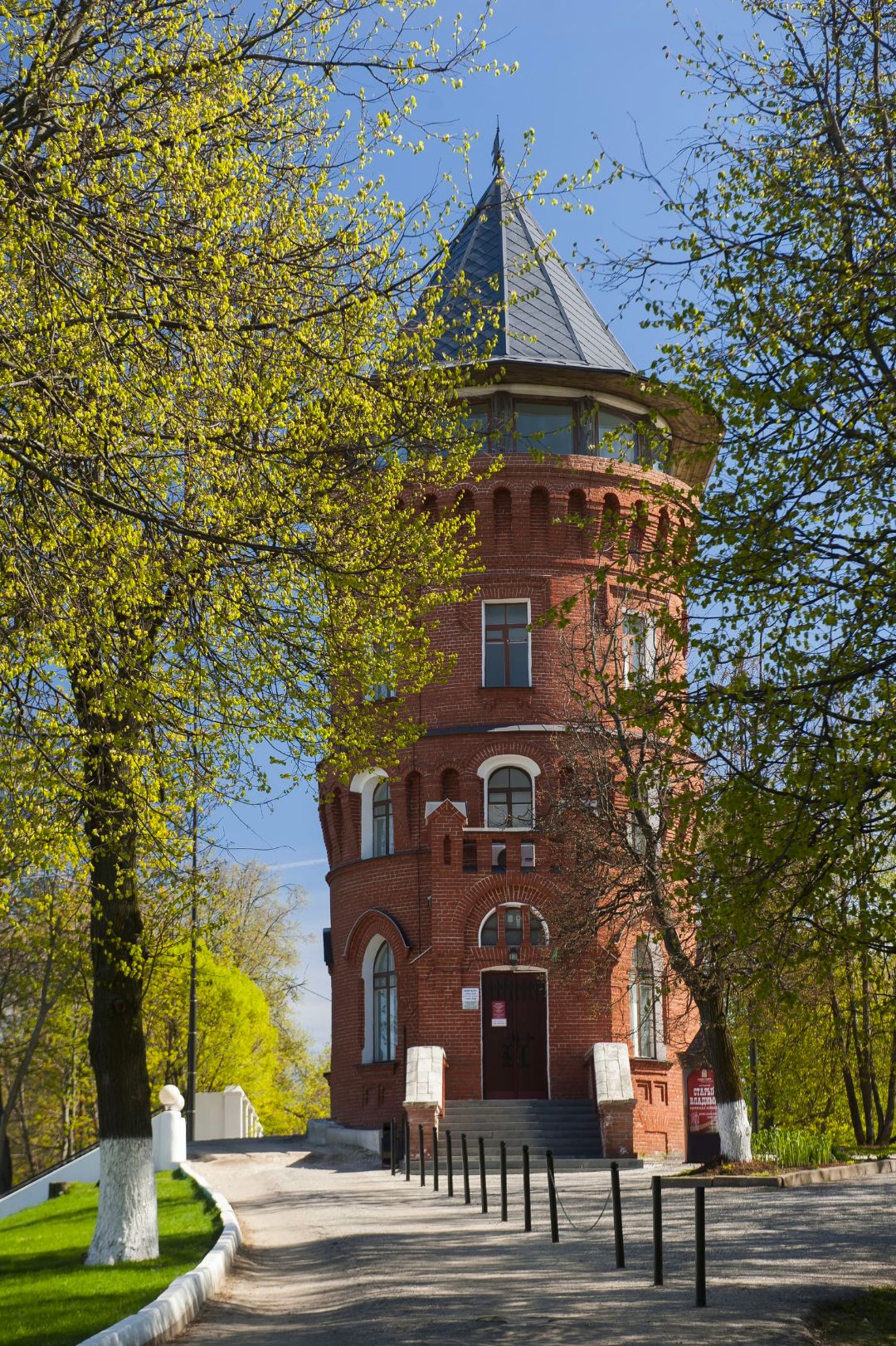 The Assumption Cathedral was built between 1158–1160 by Prince Andrei Bogolyubsky as one of the primary churches of the Vladimir and Suzdal principality. The cathedral stands on a high hill over the Klyazma River. Its original design reflected both the majesty of Vladimir as a capital city and the power of the local prince, with a shining cupola, exterior walls decorated by carvings and paintings, and copper-guilded walls. After the 1189 fire, the cathedral was rebuilt by Prince Vsevolod III (the Big Nest). A high gallery rose around the old walls to make room for the expansive interior.

After the original frescoes were damaged in a fire set by the Mongols, the Cathedral was decorated with new ones in 1408. The famous Russian painters Daniil Chorny and Andrei Rublev came to Vladimir to paint icons and frescoes, and nowadays several icons painted by Andrei Rublev, originating from the iconostasis of the Assumption Cathedral, are exhibited at the State Russian Museum in St. Petersburg and the State Tretyakov Gallery in Moscow. Millions of tourists from all over the world come to Vladimir to have a look at the fresco of the Last Judgement – one of Rublev’s true masterpieces.

*The Dormition and the Assumption are, respectively, the different names in use by the Russian Orthodox and Catholic traditions for the end of Mary's life and departure from the Earth. 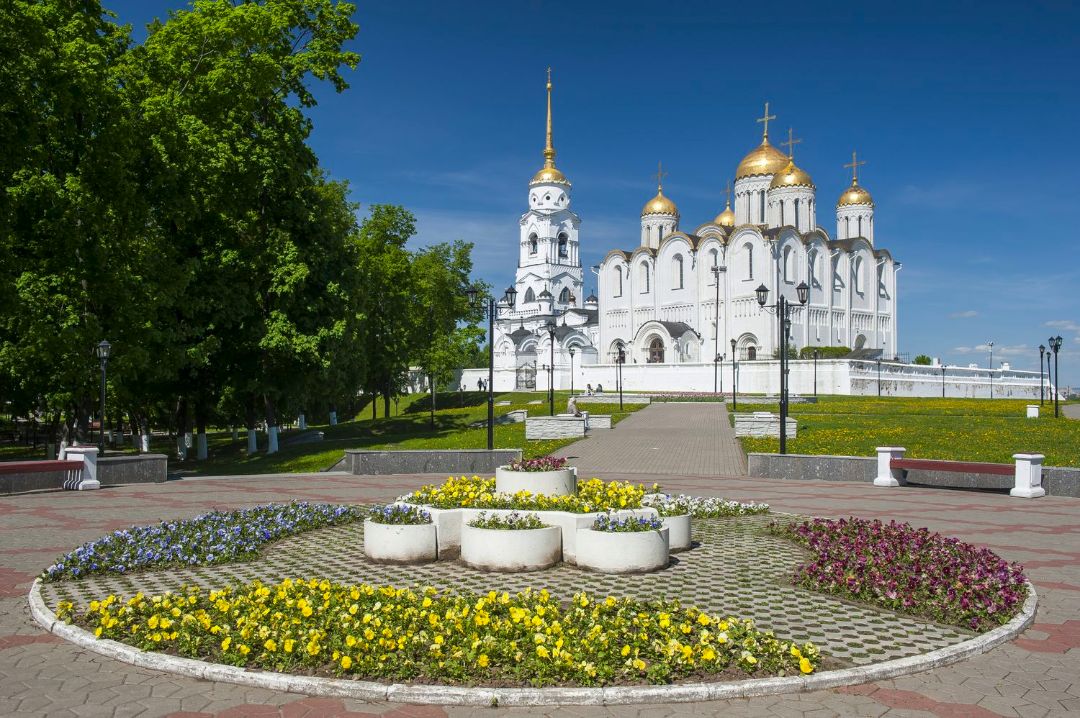 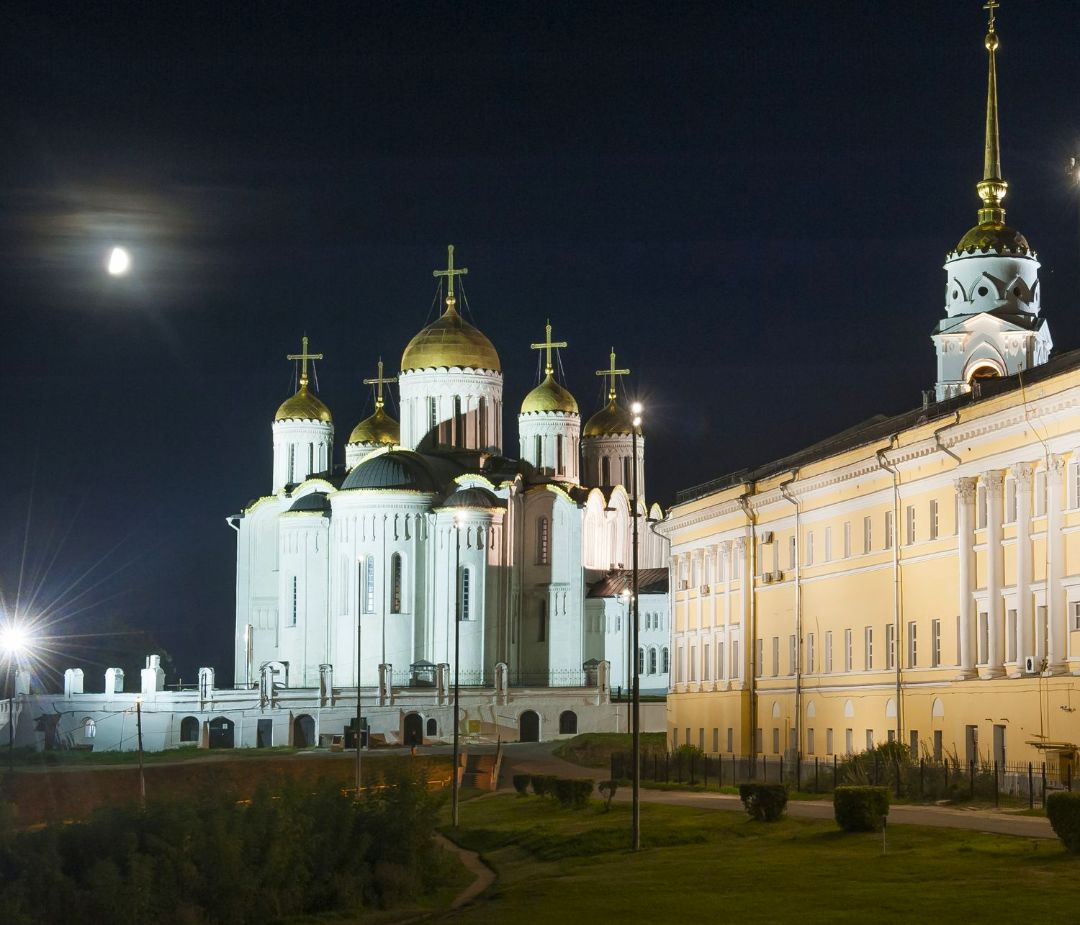 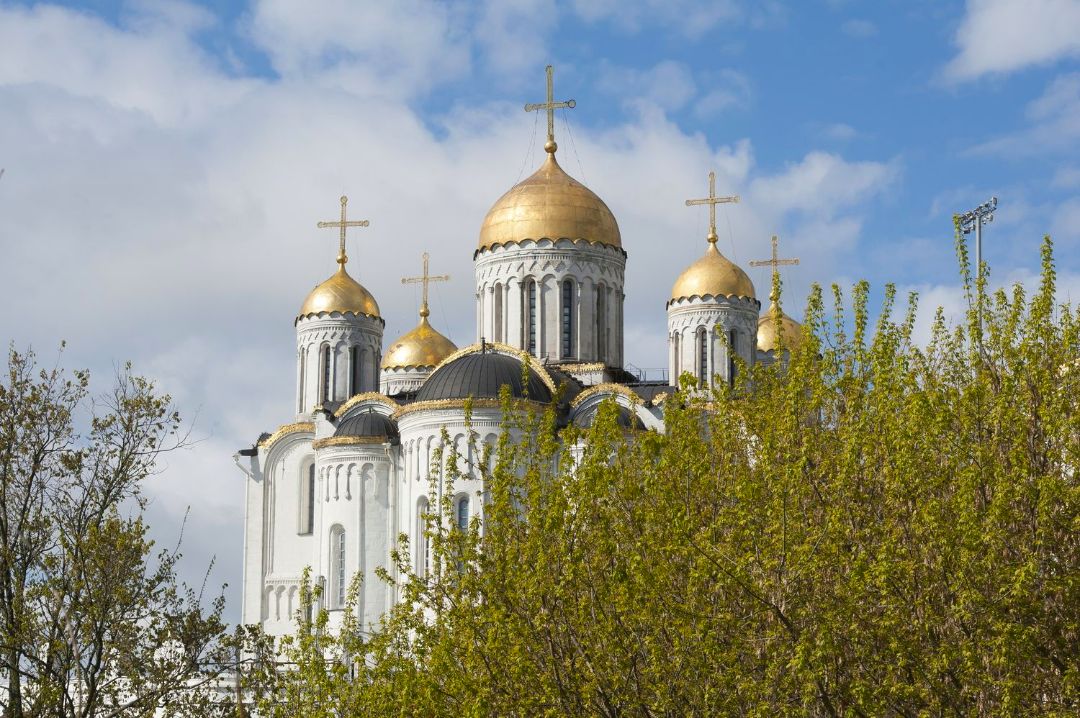 The Cathedral of St. Demetrius is a pristine example of Vladimir and Suzdal’s architecture and relief carving. It was built in the 1190s by Vsevolod the Big Nest, Grand Prince of Vladimir, who built it near his palace for personal use. The Cathedral is a relatively small single-domed church, but its perfect proportions illustrate the artistic ideals and conventions of twelfth-century Vladimir and Suzdal.

What sets the Cathedral of St. Demetrius apart from other buildings of the period is its extremely rich carved limestone decorations. Visitors can look at fascinating bas-reliefs depicting lions, centaurs, snow leopards and exotic ornaments. Repeated in the central part of all three façades is a composition featuring King David, who was associated in medieval art with the celebration of the beauty and harmony of the world. Above the left window of the north wall is an image of Prince Vsevolod enthroned and surrounded by his sons. Among the carved images on the southern wall is the figure representing Alexander the Great and several scenes from Greek mythology – the Labours of Hercules.

The reliefs of the Cathedral of St. Demetrius are enigmatic: while some symbols have been deciphered, their general idea is not completely understood even today.

Inside the church, there are surviving fragments of 12th-century frescoes painted by Byzantine and Russian artists. At present, the cathedral houses an exhibition devoted to its history and architecture. 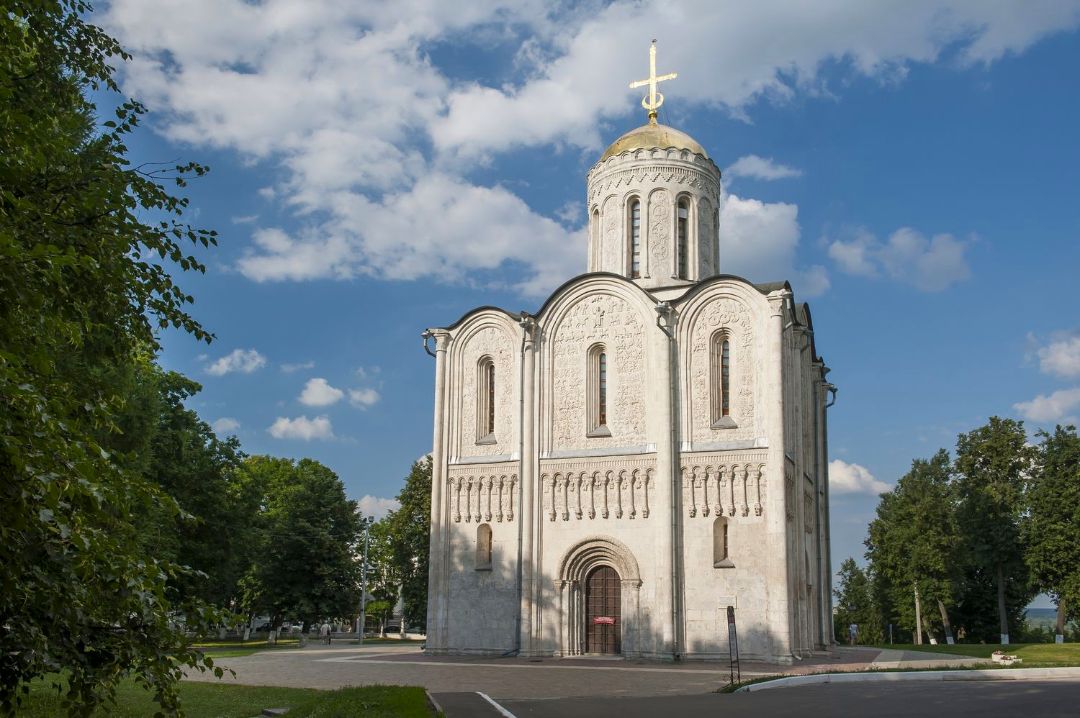 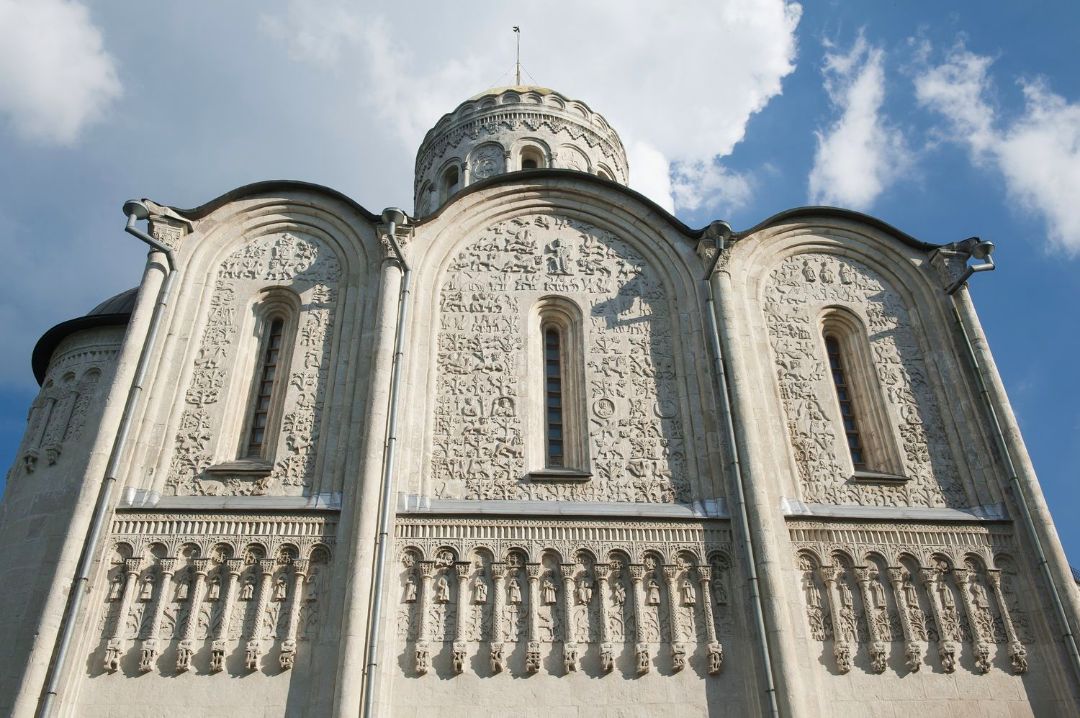 The building of the former provincial administration – Palaty

This stone building between the two ancient cathedrals was built by the architect Karl Blank in the 2nd half of the 18th century. The building housed the offices of the provincial administration. The first printing house and editorial office of the Vladimir provincial newspaper started their work here. The district court occupied rooms on the first floor. The first State Bank office in Vladimir was opened here in 1849. The office of the Vladimir Governor, Provincial Government and Treasury Chamber were also located here.
In the 1850s, the famous Russian writer Mikhail Saltykov-Shchedrin visited this place on business. He was sent as a government courier to check the work of the provincial office. The impressions he received here formed the basis of his Provincial Sketches.
From 1901 to 1908, the well-known Russian émigré writer Ivan Shmelyov – author of The Summer of the Lord and The Sun of the Dead – lived in Vladimir and served as an official for special assignments in the Vladimir State Chamber. During his Vladimir period he wrote several short stories.
After the revolution, the building served the headquarter of the regional Executive Committee, and its numerous departments: Agriculture, Trade, Culture, Medicine, printing house. In 1989, Palaty housed 64 organizations. In the 1990s, the building was transferred to the Vladimir and Suzdal Museum. It became possible to store the Museum’s historical collections and restoration workshops here, in the former governmental building. Several interesting exhibitions found place on the first floor – the Picture Gallery and the Vladimir Nobility exhibition. A unique Children's Museum Center was established on the ground floor. It helps the local teachers to give lessons in Vladimir history, arts and traditions. 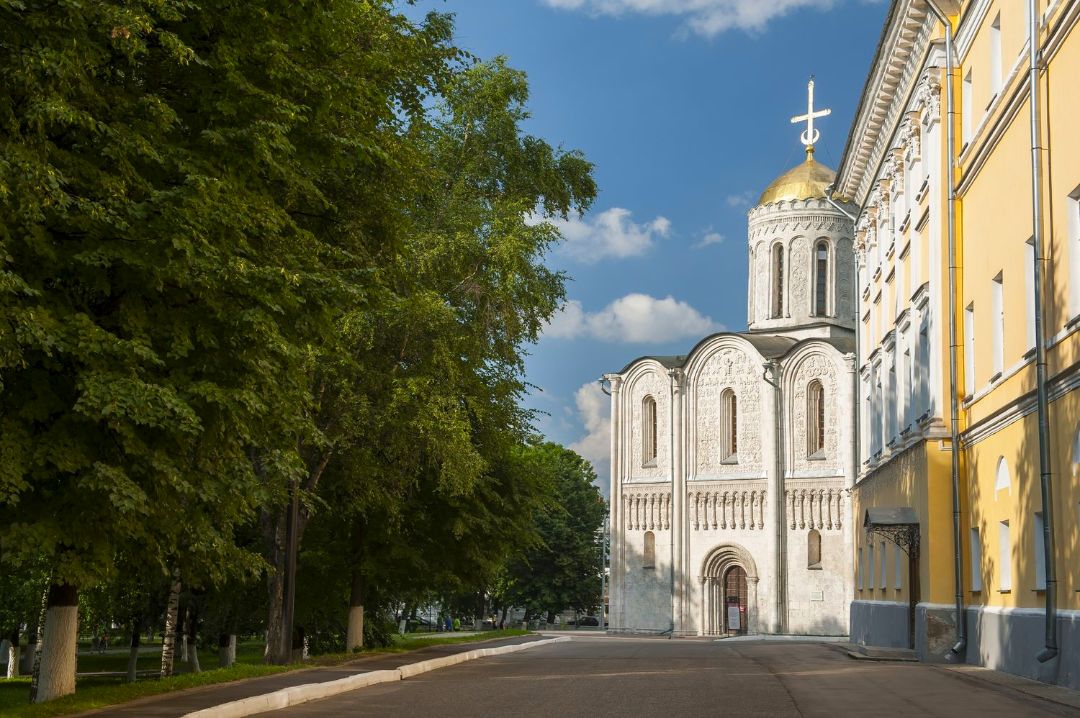 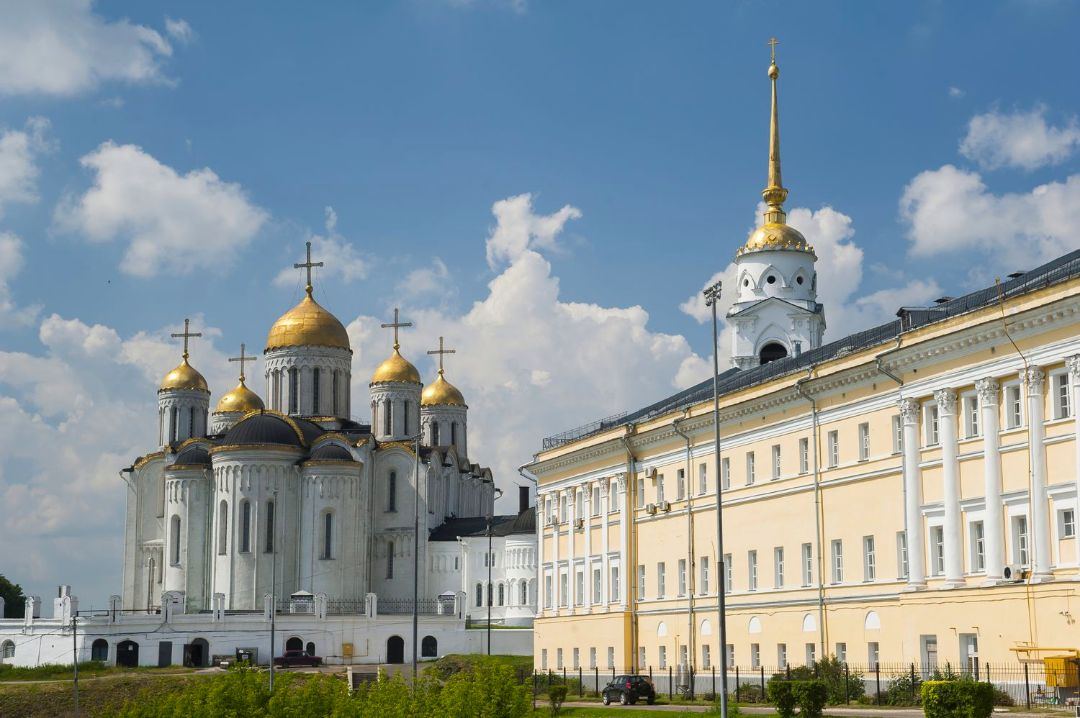 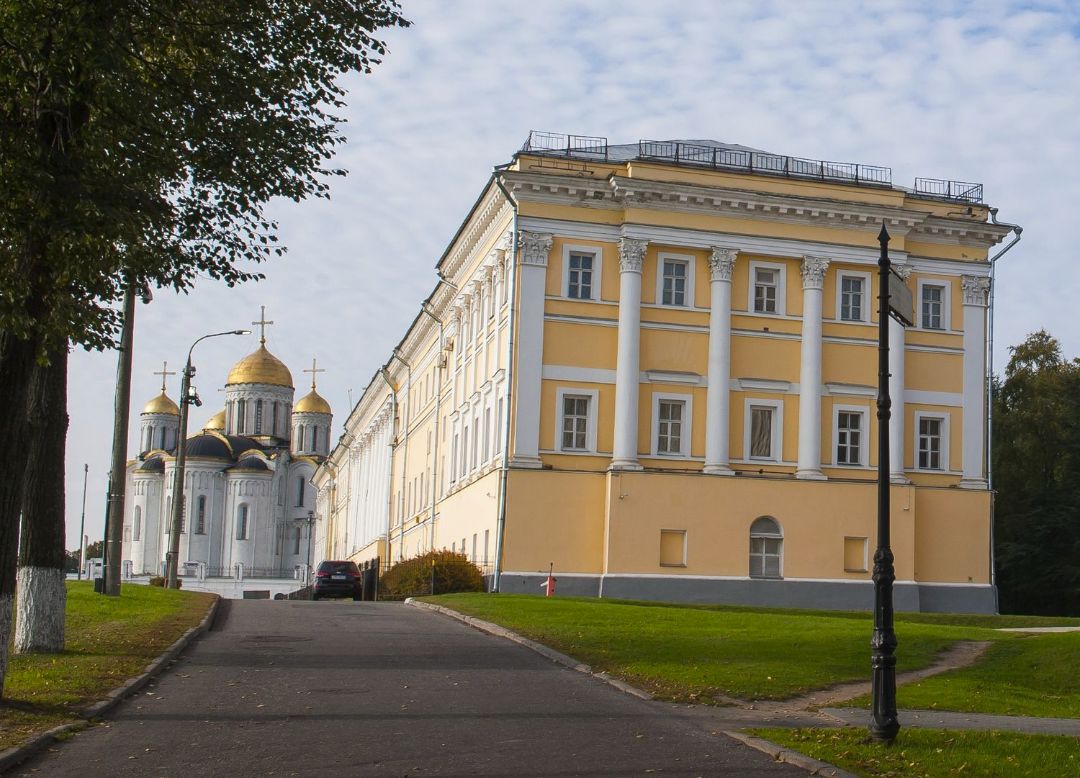 The History Museum is located in a beautiful Russian-Byzantine-style building from the early 20th century. It was built in 1906 by Peter Begen, who intended it to be both a history museum and a library.

This high-roofed, two-storied building looks like a mansion typical of old-Russian nobility. The entrance is decorated with a porch and a balcony, resting above it on white-stone figured columns. The façades are lavishly embellished with intricate window surrounds, 17th-century ornamental ceramic tiles, cornices, and niches.

The museum’s exhibit starts from the stone-age period, informing visitors about the archaeological site of Sunghir. This was a long-term hunters’ settlement that dates back to 330 BC. The visitor can trace the local history through the Finnish-Hungarian period and the later Slavic times. The central hall’s exhibits focus on the events from the 10th to the 13th century – namely, the foundation of Vladimir and its becoming the Russian capital. Visitors are sure to encounter the names of famous Russian princes Vladimir Monomakh and Andrei Bogolyubsky, as well as locally-born Dmitry Pozharsky, Mikhail Lazarev and Nikolai Stoletov, who did their best for the might and glory of the Russian state. 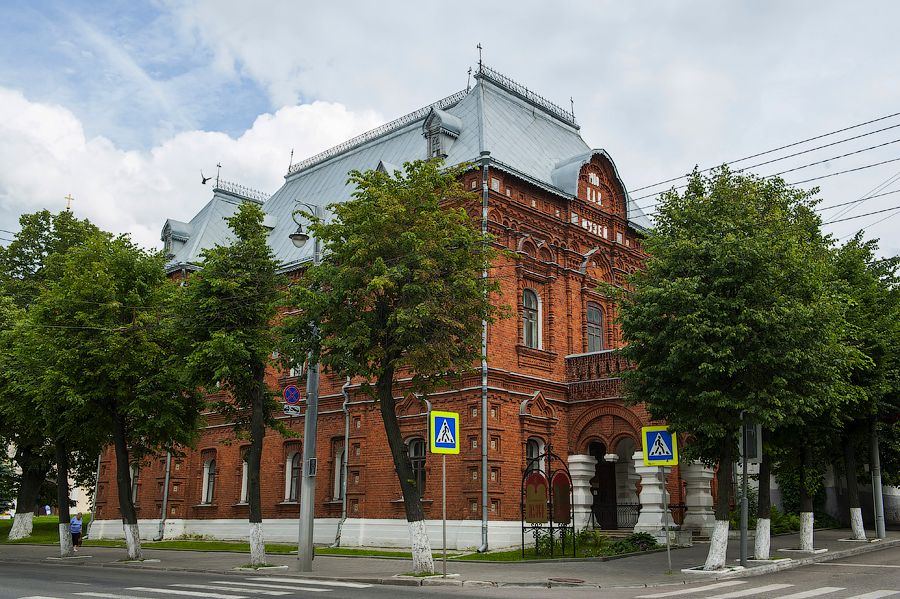 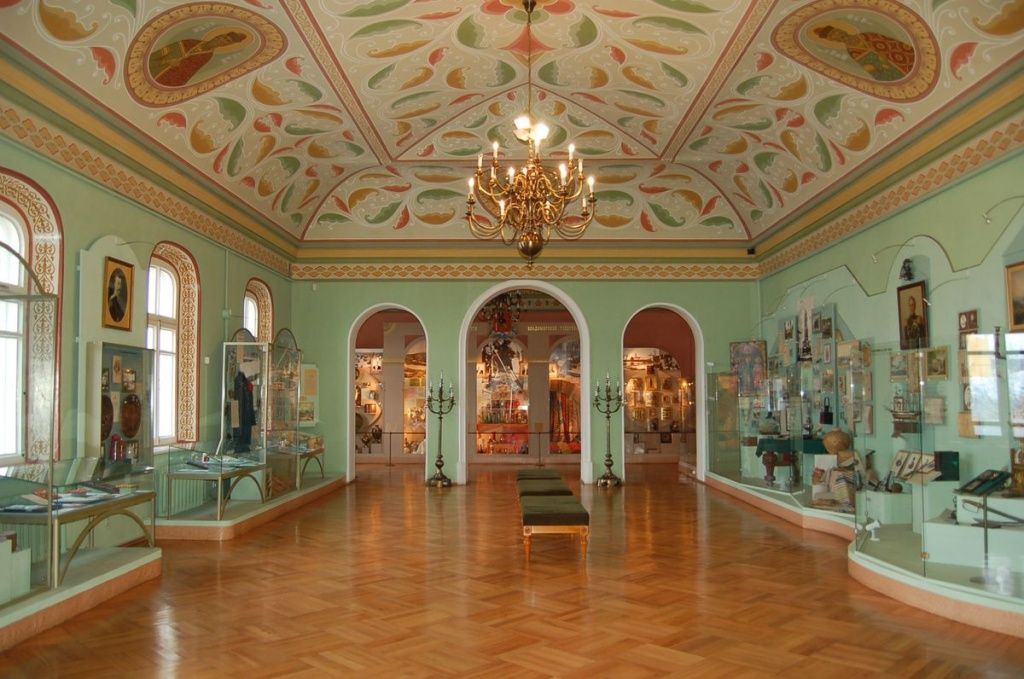